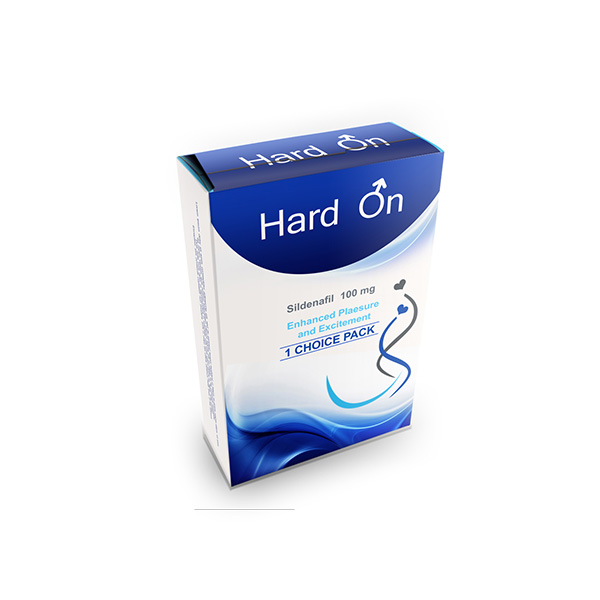 Hard On is one of the most popular generic versions of Viagra. Its effectiveness and quick absorption time are unlike other ED medications.

Hard On is one of the most popular generic versions of Viagra. Its effectiveness and quick absorption time are unlike other ED medications.

It is manufactured by Aurochem from India and is available in two different versions (strong and extra strong).

Usage Information for Hard On

Ask your doctor for detailed instructions on using Hard On. On the other hand, you can always refer the patient information booklet which contains professional instructions regarding medication usage.

Hard On is absorbed into the body depending on one's health. So, the time often differs in different people.

In most cases though, it is best when taken 60 minutes prior to having sex. The

The effects of the drug will last for much longer.

The maximum permitted dosage is one pill in a 24 hour period. Do not exceed it.

Hard On is taken only as and when required. It is not to be used every day as a regular therapy. So, the problem of a missed dose does not arise.

If you accidentally missed to take the medication prior to having sex, then you can take it as soon as you remember it. But then you will have to wait for the stipulated amount of time for Hard On to be absorbed by the body and start to take effect.

We recommend storing your medications at room temperature (59 and 86 degrees F) in its original container. Keep it away from excessive heat, moisture or light.

Protect it from kids and pets.

I think that I overdosed. What should I do?

Before you begin therapy, you should discuss your medical history in detail with your health care provider. Allergies if any, to both food items and medications must be clearly mentioned.

Conditions under which you should avoid using Hard On?

Is vigorous exercise restricted to you because of cardiac health?

Hard On is a used to provide an erection when sexually stimulated. So, usage of the drug is restricted if you have a history of heart problems like arrhythmic disorders, heart attack or stroke.

If you notice any symptoms like, chest, shoulder, neck, or jaw pain; numbness of an arm or leg; severe dizziness, headache, nausea, stomach pain, or vomiting; fainting; or vision changes, while indulging in sexual activity or any other vigorous exercise, then stop doing it immediately. Seek emergency medical care for it might be signs of a heart attack.

Hard On must also be avoided if one or more of the following conditions apply to you:

Liver disease
Kidney disease (or if you are on dialysis)
A blood cell disorder such as sickle cell anemia, multiple myeloma, or leukemia
A bleeding disorder such as hemophilia
A stomach ulcer; retinitis pigmentosa (an inherited condition of the eye), a physical deformity of the penis (such as Peyronie's disease)

Usage of alcoholic beverages is generally not recommended while taking the medication because alcohol is a muscle relaxant.

Other than this, mild drowsiness or blurred vision may be experienced while using Hard On. This will stop occurring once the body gets used to the medication.

So, it is recommended that you avoid tasks that require an alert mind. For ex, driving, handling heavy machinery etc until you know how your body reacts to the drug.

If you feel giddy or drowsy, then sit or lie down immediately till the feeling passes off.

Medications that can cause reactions with Hard On

Hard On is known to react adversely when combined with certain medications. The reactions are normally mild in nature but can be severe at times.

Read this before using Hard On

Rarely, a condition called Priapism, in which a painful erection occurs, has been noticed. The erection lasts for more than 4 to 6 hours and cases irreversible damage to the penis. If you notice an erection that does not fade even after having sex, then contact your doctor immediately.

We recommend that you do not use other ED medications while using Hard On.

If you are over the age of 65 and have liver problems then you must maintain general caution while using Hard On.

Hard On is not for use by women or children.

The Importance of Safe Sex Practices

Hard On is a cure for ED but does not protect against the spread of sexually transmitted diseases. Hence, always practice safe sex.

Hard On is not to be used if you are pregnant or expecting a child. It may pose risks to your unborn fetus. Speak to your doctor for more information on this.

It is not clear whether the medication is excreted via the breast milk. Speak to your doctor for more information.